South Africa's Minister of Water and Environmental Affairs, Ms Edna Molewa, has confirmed that a total of 668 rhinos were lost to poaching in South Africa in 2012 and a total of 267 arrests were made in relation to rhino poaching.
In 2012, the Kruger National Park was the hardest hit by poaching, losing 425 rhino. The North West province has lost 77 rhinos to illegal poaching; KwaZulu-Natal has lost 66 rhinos and Limpopo 59 rhinos. 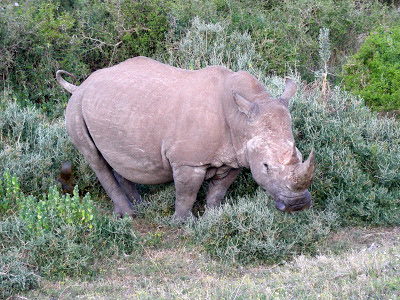 Final rhino poaching figures 2012 (issued on 10 Jan 2013):
The Department of Environmental Affairs (DEA) is urging members of the public to report incidents of rhino poaching or any tip-offs that could lead to arrests and prevention of illegal killings to 0800 205 005.
Posted by Seb at 8:44 AM