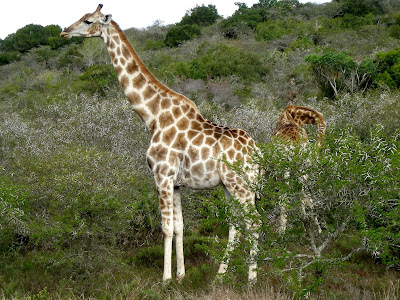 South Africa's Department of Transport has approved the adjustment of toll tariffs on national roads for the 2018/19 tax year. The new tariffs, which are getting adjusted on an annual basis, are influenced by the Consumer Price Index (CPI) over the preceding twelve months and reflect the increase in value-added tax (VAT) from 14% to 15% recently announced in South Africa's 2018/19 budget. The adjustments were published in the Government Gazette 41545 (28 March 2018, page 7); the new toll tariffs in South Africa came into effect on 12 April 2018.

Botswana's Department of Meteorological Services (DMS) has released the "Botswana Winter Outlook (May to July 2018)". According to the DMS, normal temperatures with a tendency to below-normal are likely to be experienced throughout Botswana between May 2018 and July 2018.

Normal maximum and minimum temperatures for:
Normal to below normal temperatures are expected over Botswana during May 2018 to July 2018. Cold spells will be experienced from time to time, due to local and intra-seasonal variations.

Johannesburg: National strike might cause delays to and from OR Tambo International Airport!

Due to today's national strike (25 April 2018) in South Africa, the management of OR Tambo International Airport (JNB) in Johannesburg advises passengers of possible delays in reaching the airport and recommends to play it safe, to anticipate potential delays and leave earlier for the airport than they would under normal circumstances. Strike-related flight delays are currently not expected.

The South African Federation of Trade Unions (Safttu) and affiliates called for national strike in South Africa on 25 April 2018 in protest against the proposed national minimum wage of R20 an hour and changes to labour laws.
Posted by Seb at 12:07 PM No comments:

The times slots below will apply:
Pre-booked day visitors must ensure that they arrive within the time slots, as per their reservation. Arriving outside the booked time slot, will be regarded as non-booked and therefore not preferential. These bookings can be changed through SANParks Reservations offices. Visitors will be able to book up to 80% of Day Visitor Quota per gate. 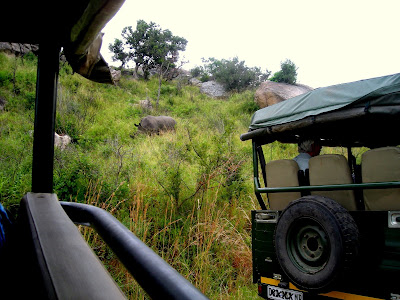 Visitors should also take note of the following important information:

Shosholza Meyl: Temporary suspension of the main line passenger service between Johannesburg <> Durban in May 2018!

Shosholza Meyl just announced that due to rail line maintenance the main line passenger service between Johannesburg <> Durban will be suspended on 09 May 2018 (Wednesday) and 11 May 2018 (Friday). Booked passengers travelling on 09 May 2018 or 11 May 2018 on the Durban line will be transported by bus to their various destinations. For more information contact Shosholoza Meyl.

South African National Parks (SANParks) has released the visitor numbers to Addo Elephant National Park in South Africa's Eastern Cape. According to SANParks, the Park had 305 510 guests between 01 April 2017 and 31 March 2018. This represents an increase of 15% on the same period in 2016/17 with 265 585 guests to Addo Elephant National Park.
Slightly over half of these were international tourists – 158 162 (52%), with 146 091 South Africans (47%) while 1 257 visitors from Southern African Development Community (SADC) countries made up the minority. Dissected into day/overnight visitors, 82% or 250 232 were day visitors, while the remaining 18%, or 55 278 were overnight guests. 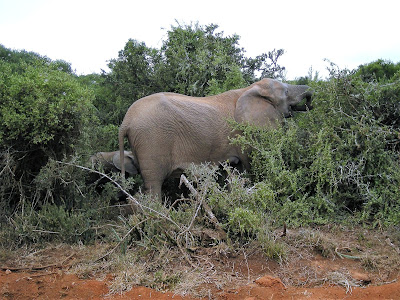 The majority of South African visitors to Addo Elephant National Park originated from the Eastern Cape – 101 374 which represents 69% of the total, followed by 21% or 30 448 from the Western Cape.
Germany, Netherlands and United Kingdom were the Addo Elephant National Park's top three overseas markets, which represented 87 146 (55%), 15 391 (10%) and 8 361 (5%) of the international market respectively.
Posted by Seb at 11:18 AM No comments:

The eThekwini Metropolitan Municipality, the metropolitan municipality that includes the city of Durban and surrounding towns, just announced that portions of:
will be closed to public from today (20 April 2018) to allow for sand pumping. The beaches will reopen in approximately four weeks.

Swaziland's King Mswati III announced at the 50th anniversary celebrations of the country's independence (and his 50th birthday) the official renaming of Swaziland (Kingdom of Swaziland). The new official name of Africa's last remaining absolute monarchy is from today "Kingdom of eSwatini" ("place of the Swazi" in siSwati, the Swazi language). Well... we'll keep you posted!

King Mswati III has announced Swaziland ???? will now be known as The Kingdom of Eswatini
— Nomsa Maseko (@nomsa_maseko) April 19, 2018 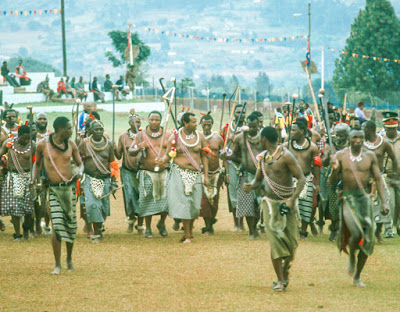 The City of Cape Town just announced that the city's MyCiti bus service is suspended until further notice. This is due to a nationwide strike, over a wage dispute, affecting the entire bus industry across South Africa.

Johannesburg's Constitution Hill is a living museum that tells the story of South Africa's journey to democracy. The site is a former prison and military fort and is, today, home to the country's Constitutional Court. Constitution Hill opens its doors to visitors free of charge* on Freedom Day (27 April 2018).
The Constitution Hill precinct is located at 11 Kotze Street in Braamfontein, Johannesburg near the western end of the suburb of Hillbrow. The opening hours are daily from 09:00 to 17:00, with the final tour departing from the Visitor Centre at 16:00. Tickets for adults cost between R65 (1hrs highlights tour) and R350 (3hrs time travel tour). If you are visiting Constitution Hill as part of your City Sightseeing red bus tour, your red bus ticket entitles you to a 25% discount off your Constitution Hill ticket price on the day of your red bus trip.

*This offer applies to general admission for self-guided tours throughout the precinct.
Posted by Seb at 2:26 PM No comments:


online flight booking on TravelComments.com >>
Posted by Seb at 9:08 AM No comments:

After an absence of more than 25 years, African Wild Dogs have been reintroduced into Gorongosa National Park in Mozambique by the South African Wild Dog Advisory Group (SAWAG). The founding pack of fifteen animals consists of nine males, which naturally dispersed from their natal pack in the uMkhuze Section of the iSimangaliso National Park in South Africa in 2016, and six free-roaming female wild dogs, also originating from the region.
African Wild Dogs are listed as endangered by the International Union for Conservation of Nature (IUCN), and continue to face threats in many countries and landscapes in Africa. The pressures facing this charismatic species include loss of suitable habitat, persecution, snaring within existing game reserves, and disease.

In case you are planning to use an Intercape bus to or from Victoria Falls in Zimbabwe: The pick-up/drop-off point has changed from The Kingdom Hotel (1 Mallett Drive) to the Total Garage Vic Falls (251 Livingstone Way; see map).

update (26 April 2018): Please be advised that all Iziko Museums (except for The Castle of Good Hope and Groot Constantia) in Cape Town will be closed on Workers' Day, 01 May 2018.

Iziko Museums of South Africa just announced on Facebook that visitors will have free access to all of its museums and galleries in Cape Town (except for the Iziko Planetarium & Digital Dome, Groot Constantia and the Castle of Good Hope) on Freedom Day on 27 April 2018!

Swiss airline Edelweiss Air will add an additional weekly flight between Zürich Airport (ZRH) in Zürich and Cape Town International Airport (CPT) in Cape Town from October 2018. This will increase the number of direct seasonal flights between the two cities from three to four a week.


online flight booking on TravelComments.com >>
Posted by Seb at 10:00 AM No comments:

According to the latest poaching statistics by Botswana's Department of Wildlife and National Parks (DWNP), the country has lost 62 elephants in 2017/18 to illegal poaching activities compared with 42 elephants in 2016/17. There has also been an increase in trafficking of elephant tusks - based on numbers of tusks recovered, 109 tusks have been trafficked in 2017/2018 (as of end of February) compared with 48 in 2016/2017. Elephants are mostly poached in the Linyanti and Shaile areas along Botswana's border with Namibia. 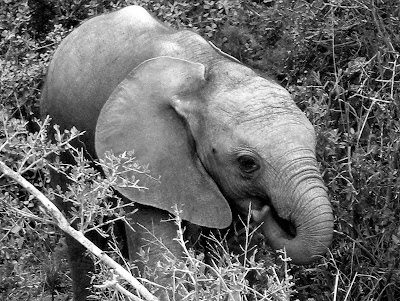 
online flight booking on TravelComments.com >>
Posted by Seb at 11:59 AM No comments:

The flag carrier of France, Air France, is set to increase its service between Charles de Gaulle Airport (CDG) in Paris and Jomo Kenyatta International Airport (NBO) in Nairobi. The airline will introduce an additional fourth weekly flight on board a Boeing 787-9 on 28 October 2018.

online flight booking on TravelComments.com >>
Posted by Seb at 3:30 PM No comments:

Airports Company South Africa (ACSA) has published the on-time performance results of domestic airlines’ flying out of OR Tambo International Airport (JNB) in Johannesburg, Cape Town International Airport (CPT) in Cape Town and Durban's King Shaka International Airport (DUR) in March 2018.
On-Time Performance is measured by comparing the actual off-block time (when aircraft pushes back) against the airline schedule time for a departing flight. The measurement is done in accordance with the IATA (International Airlines Transport Association) universal standard benchmark with considers a 15 minute deviation from the scheduled time as an on-time departure.

online flight booking on TravelComments.com >>
Posted by Seb at 11:15 AM No comments: