The Zambia Airports Corporation Limited (ZACL) has announced that yesterday (06 October 2021) was the last day for commercial flights at the "old" Simon Mwansa Kapwepwe International Airport (NLA) in Ndola in the Copperbelt Province in northern Zambia. From today (07 October 2021), all commercial flights to Ndola will land at the "new" Simon Mwansa Kapwepwe International Airport, which also takes over the IATA code "NLA" from the old airport. The new airport, which was previously known as Copperbelt International Airport and was formally commissioned on 05 August 2021, is located some 20 kilometres west of Ndola off the Ndola-Kitwe dual carriageway, past the Ndola Girls National Technical School and the Dag Hammarskjold Memorial Site. 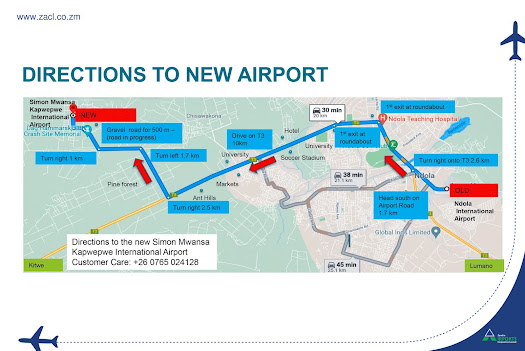 The "new" Simon Mwansa Kapwepwe International Airport (NLA) has a capacity of one million passengers per annum, three aero bridges, a new fire and rescue service station, a cargo terminal, business complex, aircraft maintenance hangar and an airport fuel farm. According to ZACL, in the near future the airport will also house a 50-roomed luxury hotel which will be managed by a renowned hotel group.