According to the "SA Wealth Report 2020" by South African wealth research group New World Wealth (NWW), Johannesburg (total wealth* held in the city: US$243 billion), Cape Town (US$131 billion), Durban and Umhlanga (US$ 56 billion) as well as Paarl, Franschhoek and Stellenbosch (one of the fastest growing areas in South Africa for high-net-worth individuals (HNWIs)) are the four wealthiest cities in South Africa. While Johannesburg holds the top position in terms of total wealth*, Cape Town takes the lead in the property market (measured in US$/m²). South Africa's top five most expensive streets and suburbs are all located in the Mother City. 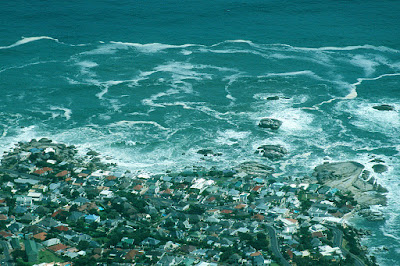 As part of the research for the "SA Wealth Report 2020", NWW also took a look at the top holiday hotspots for the wealthy in South Africa. According to the findings, Cape Town, Umhlanga and La Lucia, Ballito, Plettenberg Bay, Knysna, George and Oubaai, Hermanus, Wilderness, St Francis Bay and Natures Valley are the top holiday spots for South Africa's high-net-worth individuals (HNWIs).


*The term "total wealth" refers to the private wealth held by all the individuals living in each city.
Posted by Seb at 11:53 AM