South Africa has lost 341 rhinos to poachers in the first 10 month of 2011, compared to a record total of 333 in 2010. Most rhinos were killed in the Kruger National Park. Over the past 12 years, figures from South Africa National Parks (SANParks) show, 999 rhinos have been killed in South Africa. 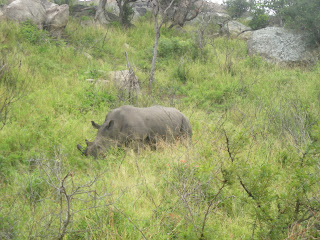 According to the 4th National Compliance and Enforcement Report, issued by the South African government, a total of 214 (92 of them in Kruger National Park) suspected rhino poachers were arrested in South Africa between April 2010 and March 2011, and 16 were killed in armed conflicts with wildlife officials during that period.
South Africa has the largest population of rhinos in Africa and in the World. According to the World Wildlife Fund (WWF), 1,916 black rhinos and 18,780 white rhinos are currently living in South Afirca.
Posted by Seb at 7:39 AM