The team behind Two Wheels Across, a full service production house based in the UAE, recently spent 6 weeks in Cape Town to film an aerial portrait of the Mother City. Sit back, put your headphones on, switch to full screen and enjoy the beauty of Cape Town summed up in a 2:37 minute video! Kudos Two Wheels Across!

Posted by Seb at 10:38 AM No comments: Links to this post

The flag carrier airline of the United Kingdom, British Airways, will reduce its weekly service between London's Heathrow Airport (LHR) and Cape Town International Airport (CPT) in Cape Town by two flights during the South African winter season (from 27 March 2016) due to commercial reason.
The airline will cancel its flight BA045 between London <> Cape Town on Thursdays and Saturdays, while the return flight between Cape Town <> London (BA044) will be cancelled on Fridays and Sundays. Affected customers will be re-accommodated onto flights BA059 and BA058 on the same day.

online flight booking on TravelComments.com >>
Posted by Seb at 3:36 PM No comments: Links to this post

MRI Botswana opens a new state of the art polyclinic in Kazungula/Kasane!

MRI Botswana, an emergency medical transportation company in Botswana, has opened a new state of the art medical facility in Kazungula's Borogo Junction Mall on 22 September 2015. The services of the clinic, which is running under the newly established brand name Prime Health, are ranging from a GP Practice (Prime Health Medical), a Pharmacy (Prime Health) and Emergency Medical Services (EMS). All services are offered by a team of qualified paramedics supported by EMS-trained doctors and nurses. Kazungula is located in the far north of Botswana, about 10 km east of Kasane.

Posted by Seb at 2:27 PM No comments: Links to this post

The Peace Parks Foundation and the Mozambican Minister of Land, Environmental  and Rural Development, Mr Celso Correia, have signed a co-management agreement in order to develop Zinave National Park in Mozambique over the next five years. Zinave National Park will be developed as an integral component of the Great Limpopo Transfrontier Conservation Area (TFCA), the larger area surrounding the core transfrontier park.

The main developments in Zinave National Park will be:
Zinave National Park, situated in the district of Mambone near the Save river in Mozambique's province Inhambane, created by decree on 26 June 1973 and currently covers 4,000km². The Park has very diverse tree species, inlcuding the Acacia nigrescens-dominated plant community, as well as dry Terminalia woodland in a scenic landscape. It boasts massive trees and has a very high carrying capacity for wildlife.
Posted by Seb at 3:30 PM No comments: Links to this post

Chakalaka is one of the most uniquely South African dishes. The usually spicy vegetable relish is popular all over South Africa and comes in many variations (see Jodi-Ann Pearton's version or KitchenCOZA's version) depending on region and, of course, family traditions. Most Chakalaka versions include onions, garlic, chillies, curry (power or paste), tomatoes and beans. It is traditionally served with meat, pap, bread or stews. Capetonian chef Funi presents his version in the video below. Enjoy! Kudos Funi! To get the recipe for Funi's Chakalaka click here!

Posted by Seb at 11:52 AM No comments: Links to this post

Video: "This is Namibia"!

travelnewsnamibia.com, the latest addition to the Venture Publications pool of products aimed at promoting Namibia to the world, has produced its very own image film of Namibia. "This is Namibia" highlights all of Namibia's beauty - the open spaces, the undiscovered landscapes, the unspoiled nature, the friendly welcoming people, the abundance of wildlife, the mesmerising scenery - in just 140 seconds! Enjoy the video, experience Namibia! Kudos travelnewsnamibia.com!


This is Namibia from Travel News Namibia on Vimeo.

Posted by Seb at 2:22 PM No comments: Links to this post

Great news for all travellers planning to visit Uganda and Rwanda by car. A new roadlink from Uganda (Kabale) via Gatuna into Rwanda has been officially opened to traffic. The newly-upgraded section of the road is about 80km long and eases road transport from the tourism hub of Kabale into Rwanda. Costruction of a second axis to and from Ugandan border post of Mirama Hill, where only recently a one stop centre, housing customs of both Uganda and Rwanda, immigration, and security officials, has been inaugurated, is also underway.

Posted by Seb at 2:19 PM No comments: Links to this post

Google has - in partnership with Save the Elephants and with the support of the Samburu County Government - released Street View imagery of the Samburu National Reserve, Lewa Wildlife Conservancy and the David Sheldrick Wildlife Trust. Enjoy!

Posted by Seb at 12:08 PM No comments: Links to this post

A new museum was launched in Cape Town on 01 September 2015. The Cape Town Museum, which is located in the old Standard Bank building in Adderley Street, is a state of the art heritage institution that will provide innovative ways for local residents and tourists to interact with the collection. The museum will be hosting permanent exhibitions on the history and development of Cape Town from the earliest times as well as exhibitions on contemporary Cape Town and on the Cape Town of the future. The official opening of the Cape Town Museum will be announced in the near future. We'll keep you posted!

Posted by Seb at 11:09 AM No comments: Links to this post


online flight booking on TravelComments.com >>
Posted by Seb at 10:52 AM No comments: Links to this post

Barry Lewis, a Brit running the cooking web show "My Virgin Kitchen" on youtube.com, recently did a show fully dedicated to treats from Zimbabwe. All the treats were send to him by his friend Rob, who seems originally from Zimbabwe and recently spend a holiday there. Besides dried Mopane worms (see video #2 in the playlist) and Chakalaka from Rhodes, Barry tastes Marie bisquits from Lobels, Korn Kurls from Willards, a bis-kit bar, Apricots from Baxtons and a few more typical Zimbabwean treats. Enjoy!

Posted by Seb at 2:40 PM No comments: Links to this post

Dear Supporters,We are aware of the decisions made in the High Court on Friday. Air Namibia has again used dirty...
Posted by flyafrica.com on Sunday, 6 September 2015

online flight booking on TravelComments.com >>
Posted by Seb at 11:01 AM No comments: Links to this post

Zimbabwe: Elephant numbers in the Zambezi Valley drop by 75%! 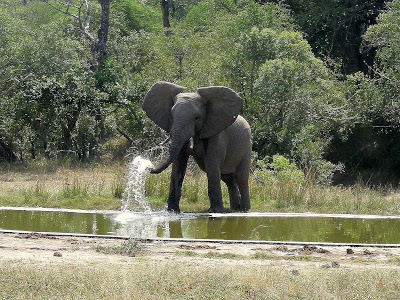 The Southern Africa Regional Climate Outlook Forum has isuued the annual outlook for the 2015/2016 rainfall season (October - March) in the Southern African Development Community (SADC) region. The period, October to March, is the main rainfall season over most of southern Africa.  Owing to the differences and evolution patterns in the predominant rainfall-bearing systems, the rainy season over the region has been subdivided into four overlapping three-month periods. The countries covered by the outlook include all SADC member states (Angola, Botswana, Democratic Republic of Congo, Lesotho, Madagascar, Malawi, Mauritius, Mozambique, Namibia, Seychelles, South Africa, Swaziland, Tanzania, Zambia and Zimbabwe).

Posted by Seb at 2:31 PM No comments: Links to this post

Durban to host the 2022 Commonwealth Games!

The Commonwealth Games is an international, multi-sport event involving athletes from the Commonwealth of Nations. The event was first held in 1930 and has taken place every four years since then (except for 1942 & 1946 due to WWII). The Commonwealth Games was last held in 2014 in Glasgow (Scotland), with the Gold Coast (Australia) hosting the 2018 event.
Posted by Seb at 3:48 PM No comments: Links to this post

Airports Company South Africa (ACSA) has published the on-time performance results of domestic airlines’ flying out of OR Tambo in Johannesburg, Cape Town International Airport, and Durban's King Shaka International Airport in August 2015.
On-Time Performance is measured by comparing the actual off-block time (when aircraft pushes back) against the airline schedule time for a departing flight. The measurement is done in accordance with the IATA (International Airlines Transport Association) universal standard benchmark with considers a 15 minute deviation from the scheduled time as an on-time departure.

online flight booking on TravelComments.com >>
Posted by Seb at 1:00 PM No comments: Links to this post

The City of Cape Town has issued a warning to all beach and ocean users to be wary of an increased in-shore shark activity over the spring and summer months. Typically, shark sightings start in late August, and continue through to April, with most sightings being reported in mid-summer.
Card

The City urges members of the public to familiarise themselves with the following general shark safety tips:
Shark Spotters were present at the following beaches:
The  Fish Hoek shark exclusion net will be in operation during the 2015/2016 summer season according to the following schedule:

Cage Diving with Great White Sharks from Cape Town >>
Posted by Seb at 3:21 PM No comments: Links to this post