A pack of six African Wild Dogs has been released onto the Zululand Rhino Reserve (ZRR) in northern KwaZulu-Natal on 01 May 2015 by the Endangered Wildlife Trust (EWT) as part of the National Wild Dog Metapopulation Project. The newly bonded pack includes four females and two males.


EWT's David Marneweck said: "African Wild Dogs are the most endangered carnivore in South Africa with a high degree of historical persecution resulting in with a drastic reduction in their numbers and range. Wild Dogs face a number of threats including direct persecution through hunting and car collisions, disease outbreak, indirect persecution (snaring) and habitat fragmentation. With consistently less than 450 Wild Dogs in South Africa, reintroductions of newly formed packs into areas where they formally inhabited is resulting in increasing the number of individuals, packs and their conservation status in South Africa. Our National Wild Dog Metapopulation Project works across three provinces to facilitate the coordinated management of Wild Dogs in small, isolated and fenced reserves in order to improve the status of this endangered species in South Africa. We are extremely excited to announce that Zululand Rhino Reserve will now become an integral part of the national metapopulation and we look forward to the persistence of Wild Dogs in this pristine habitat in the northern KZN region. 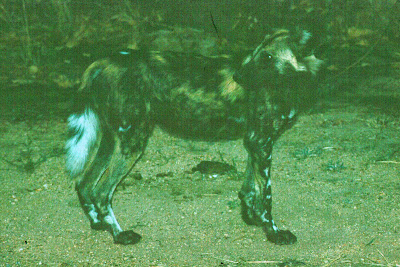 The Zululand Rhino Reserve (ZRR), located within the Msunduzi valley in northern Zululand  in KwaZulu-Natal, is the 10th current metapopulation Wild Dog Reserve in South Africa and is located in the very heart of the KZN Wild Dog population. It is home to over 70 mammal species and an exceptional diversity of birdlife.
Posted by Seb at 2:10 PM