South Africa's rail company Transnet announced the decision to terminate the world-famous Outeniqua Choo-Tjoe train service. According to Mboniso Sigonyela, Transnet’s External Communications Manager for Group Corporate and Public Affairs, Transnet identified the Choo-Tjoe as one of its non-core assets. 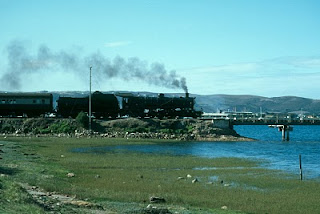 Therefore Africa’s last scheduled steam train will stop operating within the next couple of month unless a new operator for the service will be found. The company already tendered for a new operator as it hoped to privatise the service, but the parastatal could not identify a suitable new operator. The Outeniqua Transport Museum in George will remain open to the public.

UPDATE (14 Sept 2010): MOSSEL Bay has swung into action to try to save the Outeniqua Choo-Tjoe, Africa’s last scheduled steam-hauled train, which has been slated for closure later this month. More on weekendpost.co.za