Swaziland: The dates of the Reed Dance 2013 have been announced 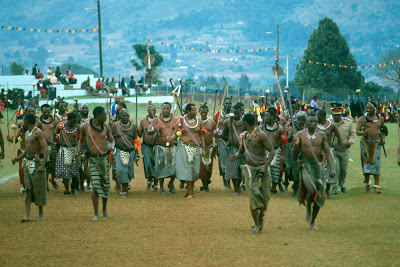 The Reed Dance ceremony is a centuries old tradition where the Swaziland's unmarried and childless females present their newly cut reed to the Queen Mother to protect her residence. The highlight of the event is the reed-giving ceremony. Tens of thousands of maidens from Swaziland gather at the Queen Mother's royal village, the Ludzidzini Royal Residence, dressed in traditional attire; bright short beaded skirts with colourful sashes revealing their bare breasts to dance and sing and celebrate the unification of the Kingdom’s women. His Majesty King Mswati lll, who sometimes makes use of the occasion to publicly court a prospective fiancée, joins the celebrations to pay tribute to the maidens.
Posted by Seb at 5:01 PM