Swaziland: The dates of the Reed Dance 2012 have been announced 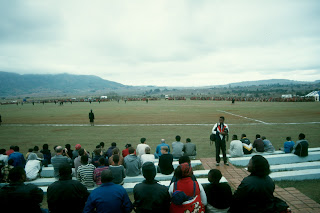 The Reed Dance, performed as a tribute to the Royal Family of Swaziland, is a traditional dance ceremony over 8 days where up to 40 000 Swazi maidens gather and dance for the Queen Mother, the mother of Swaziland's current King Mswati III. The maidens dress up in brightly coloured attire and sing and dance together as they deliver the reed (or umhlanga) to the Ludzidzini Royal Residence. One of the main objectives of the Reed Dance in Swaziland historically was for the king to choose another wife. Today, the official purpose of the annual ceremony is to preserve the women's chastity, provide tribute labor for the Queen Mother, and produce solidarity among the women through working together.